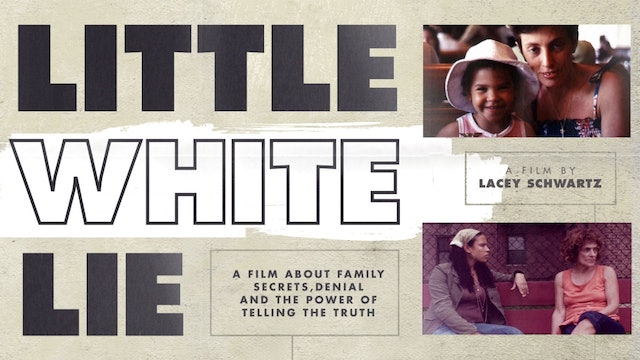 Filmmaker Lacey Schwartz grew up in a typical upper middle class Jewish household in Woodstock, NY, with loving parents and a strong sense of her identity, despite occasional remarks from those around her who wondered how a white girl could have such dark skin. As a child she always believed her family’s explanation — that her appearance was inherited from her dark-skinned Sicilian grandfather — but as a teenager, after her parents abruptly split, her gut begins to tell her something else. Lacey’s suspicions intensify when she attends a more diverse high school, where she suddenly doesn’t quite fit any racial profile, and her classmates are vocal about noting it. At the urging of her boyfriend, who is of mixed race, she begins to question her true identity and the validity of her parents’ explanation. At 18, Lacey finally confronts her mother and learns the truth about her biological father. As Little White Lie shows, both the bonds and the lies told between family members can run deep. Lacey strives to reconcile her newfound African American heritage with her Jewish upbringing, and discovers that in order to define herself, she must first come to terms with her parents’ choices and how much she is willing to let their past affect her future. Piecing together her family history and the story of her dual identity using home videos, archival footage, interviews, and episodes from her own life, Lacey discovers that answering those questions means understanding her parents’ stories as well as her own.

Right-click this and copy the link address.

Watch on your Television

Watch on your Computer